In March, we collaborated with Food Stylist Jessi Hampton from @JustTryingRecipes, inviting her to create her best shrimp and grits recipe featuring our Argentine red shrimp. Here’s what happened! 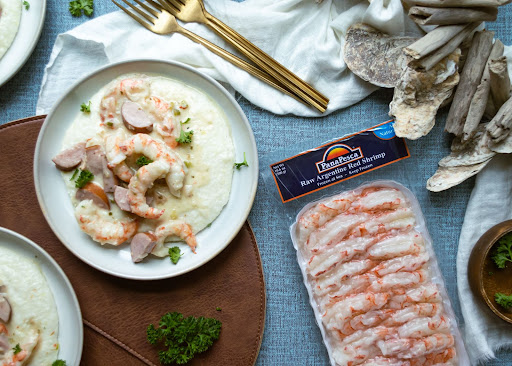 The Inspiration for This Challenge

We first became aware of Jessi’s work when we saw her simple seafood pasta recipe using our classic seafood mix. She made the process look super easy, and the final result looked delicious, so we couldn’t resist asking her to collaborate on our biggest giveaway to date.

We were looking to create a recipe that would be straightforward to follow and that showcases seafood in a way that everyone will love.

We gave Jessi free reign to choose her dish and then challenged both her Instagram and our social media followers to recreate the recipe, to be in with a chance to win a whopping $100 to spend at Panapesca!

Why Choose a Shrimp and Grits Recipe?

On why she chose to put together a shrimp and grits recipe, Jessi said, “Shrimp and grits is a go-to meal for many people living in the low country.” This dish is a favorite comfort food for many, and everyone has their version of the classic, so we were excited to see Jessi’s interpretation!

We sent Jessi some Argentinian red shrimp to help her create the best shrimp and grits recipe. Squeezing a whole recipe into a short reel isn’t easy, so having fully prepped shrimp was ideal for saving time. Jessi let us know that making the meal prep one step easier by using Panapesca peeled and ready-to-use shrimp was a no-brainer. She says:  “It was a great addition to my shrimp and grits recipe.”

How Shrimp and Grits Became a Household Favorite

Thought to originate in South Carolina, shrimp and grits was a dish with humble beginnings in America. It was an affordable way to provide a substantial meal, shrimp being an accessible source of protein.

For a dish of humble beginnings, it has been elevated in many fine dining restaurants in recent years. Originally considered a breakfast food, shrimp and grits have become more versatile and are often eaten for dinner.

The Benefits of Using Frozen Shrimp

You’ll see from the video linked below that you can add the frozen shrimp straight into the cream mixture! There’s no need to defrost, and it will quickly cook once added to the pan. Using our frozen shrimp cuts down on prep time because they’re topped, tailed, and peeled before we freeze them. They’re also conveniently portioned to help reduce waste.

Shrimp and grits is the perfect pantry dinner, making it ideal for a midweek meal. Grits have a long shelf life, as does frozen seafood, so it’s great to keep them in stock for a go-to dish that’s easy and tasty!

You can watch Jessi’s recipe come together perfectly on her Instagram with a step-by-step recording of her shrimp and grits recipe.

Winner of the Best Shrimp and Grits Recipe Recreation

Once Jessi had shared her take, it was over to you! We loved seeing the feedback on how Jessi had used the shrimp and the entries that followed.

Our winning entry was from Brandon. Check out his recreation of the shrimp and grits recipe below. Brandon said, “The recipe was super easy and delicious. We will be making it for many years to come.” Brandon won the prize of $100 worth of Panapesca seafood, and we can’t wait to see the other recipes he comes up with! 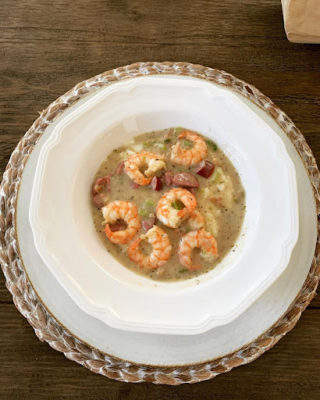 We’re passionate about providing products that make cooking easier and more appealing to everyone. Whether you’re trying to make the best shrimp and grits recipe or inventing something completely new, we love to inspire a love of seafood. Don’t forget if you’re cooking with Panapesca produce, you can tag us in your recipe photos on Instagram using @PanapescaUSA, and we repost them to our social media to help share the inspiration!